Today is the day. The day my thoughts were freed. I’ve had so many things to say, stories to tell and yet, every time I sat down, I couldn’t put the thoughts to words. Today, they seem to be bursting forth.

Today I accomplished a new project, start to finish, in about an hour or so. We needed to bring back the dreaded “chore charts” but, in a new and exciting way so that they get used again. We also needed a way to remind our boys of the various things that they keep forgetting to do without “nagging” them.

I spent lots of time searching various blogs and, of course, Pinterest. There are so many great ideas out there but, I had limitations based on what I already have on hand in the house and the ease of creation. I finally settled on this Chore Chart Tutorial from the blog My Name is Snickerdoodle. I basically followed her instructions with some minimal tweaks of my own to suit our needs. So far, I’m very proud. It felt really good accomplishing something again. 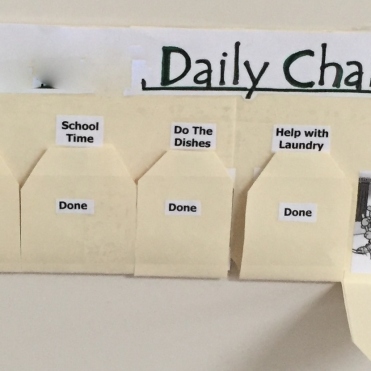 I say “again” because, as I previously mentioned, I’ve been dealing with some health issues. It turns out that my fatigue and fever over the past two months is due to a reactivation of the Epstein-Barr virus that’s cause another bout with Mononucleosis. I first got it when I worked myself to exhaustion with 3 jobs at age 19 to prove that I could live on my own. This isn’t the first time I’ve gotten a relapse either, though the last one was milder. This time is more like the original infection. Up until yesterday, I’ve had a low fever with exhaustion. Sleep either made it worse or made no difference and yet, I would fall asleep at the drop of a hat in mid-afternoon and again once the kids went to bed at 8. Being a virus, there is no medicine to help. It just takes time and rest. HA! I’m a busy mom of two wonderful, but challenging kids. Rest is never true rest! So, I continue to stumble on, day to day, taking on one or two things and then being so exhausted that I can do no more. My poor husband has been struggling along as best he can, taking care of anything that I need help with. Primarily: the nightly dinners, laundry and straightening up around the house— basically everything. So, as a person that needs to feel like I’ve accomplished things to feel good about my day, let’s add feelings of uselessness and the blues to the mix.

If that weren’t enough, the kids have been sick too. I’m fairly confident that both of them caught a mild version of my illness which, while hard to deal with, is fantastic because they are less likely to have issues as an adult with it. E has been mostly well, but frequently has fevers flare up out of nowhere and is always exhausted despite sleeping at least 7 hours a night (a lot for him). By the way, he is no longer waking at 3 in the morning but at a more normal time of 5:30 – 6:30. (Huge sigh of relief that his sleep cycle upset was only temporary!) So, he’s tired. He’s cranky and is not able to put up with his younger brother very well. This leads to lots of disputes and we tend to spend our evenings putting out fires and trying to keep them separate from each other. C is also short tempered. He has been very tired as well but, while E shuts down and is unwilling to do much, C’s being tired still involves running circles around our kitchen island and jumping on the trampoline all the time, which irritates E. Thus, the cycle continues.

Then, last week, C was having another one of “those” days when he just couldn’t get himself together to go to school. He said he didn’t feel well. He said he couldn’t think straight. He was too tired. And on and on it went. Because of all my illness, I’m currently a push-over when it comes to not leaving the house. I know it’s bad, but I really didn’t care if he stayed home. He’d had a low fever the day before so, fine. Stay home and rest.

Halfway through the morning, he starts screaming in pain. I know that his brother didn’t do anything so, I’m trying to figure it out. It turns out his ear was hurting. Now, for a normal kiddo, yes, it hurt but, for a sensory kiddo, the pain is tenfold. He’s never had an ear infection either. I’m sure that I could have done more at home, but it was bad so, I call the doctor and get him in. With an ear infection confirmed, we are sent home with suggestions to ease the pain and some antibiotics. Mr. C sure has a set of lungs! He continued to cry for a good hour or more. Finally, the home treatments start working and the pain subsides.

I figure it’ll take a day or two but he’ll bounce back like he always does and then he’ll head back to school. No dice. He had a fever for a solid week. Throughout the week he was so congested and sick that he had to sleep in my room so that I could keep an eye on him with a humidifier going too. Often I’d have to sleep sitting up, holding him so that he’d sleep propped up and stop choking on the phlegm in his throat. Dad ended up sleeping in the guest bed almost all week.

One night, C woke up screaming. He was upset and scared but not fully awake. I go to help him and find blood everywhere. All over his face, his pillow, his jammies. Everywhere! All coming from his nose. Dad was still up and heard the commotion and came in to help. He pinches C’s nose and helps him stay sitting forward, trying to keep the blood off his face and keep it from going down his throat. I grab clean clothes and more tissues. It was C’s first bloody nose and he was freaked out. Honestly, so was I. It’s one of those moments I feel like I’ve failed as a parent because I did not keep my calm. It’s terrifying to wake up and see blood pouring out of your child’s nose in the semi dark! I could have done better, but Dad came to the rescue. Usually, I react and he just stays calm and even in most situations. We make a great team. He was my hero that night. After we got the bleeding to stop, I sat up most of the night holding C because he was so scared about what happened so, we slept fitfully. Two major firsts for him in health issues this week and Mama is worn out!

C went back to school yesterday but, only for a half day. I took him back to the doctor for a follow-up to make sure that he was getting better since we didn’t expect him to get so sick. Doc says to keep watching him but, as of yesterday, he was fever-free and seemed improved. Give the antibiotics a bit more time to work.

This morning C was having one of “those” days again. He was really fighting going to school. I know that I’m a bit of a softy but, I really wanted him out of the house today. I’m so ready for our “regular” busy life. I take his temperature to prove that he isn’t sick enough to stay home. Mistake! He has a fever again. Then I noticed that he’s covered in a rash. It’s probably just a fever rash since he had one for so long, but he said it was itchy too so, he’s been home for observation. It started on his upper chest and sides, moved to cover his trunk, then creeped up to his face and neck. So far, he’s not been complaining about the itch any more than just at first. I’m sure he’ll be fine. He’s fine, right? I guess I’m a bit neurotic when it comes to my kids’ health. Maybe it’s a reaction from having to fight for their mental health issues so much. Regardless, “Take a deep breath and take one a day at a time, Mama!”

Hi, I'm Brianna — Wife, chef, cleaning lady, teacher, crafter, DIY-er, multitasker and a Stay-At-Home-Mom of two quirky kids. My husband and I have been happily married just over 20 years and continue to grow together. We try to live a simple life. We have a small home, a bit of land, a dog and chickens. We live in a small community and life here can be calm and peaceful, or hectic and crazy at the drop of a hat. A quirky kid is a one who doesn’t fit the mold or conform to what you would think a stereotypical kid would act like. They see the world differently, act differently, and, due to a lack of understanding, may be labeled as a “bad kid.” We love our "quirky kids" and every day with them is an adventure. Sometimes I laugh at things they do, sometimes I cry at things they do and, sometimes, happy hour starts early at my place!! View more posts

One thought on “One Day at a Time”